New multicart? 64 in 1 that has Windjammers :O

So, I've been browsing Aliexpress today then this cart suddenly appeared to me: 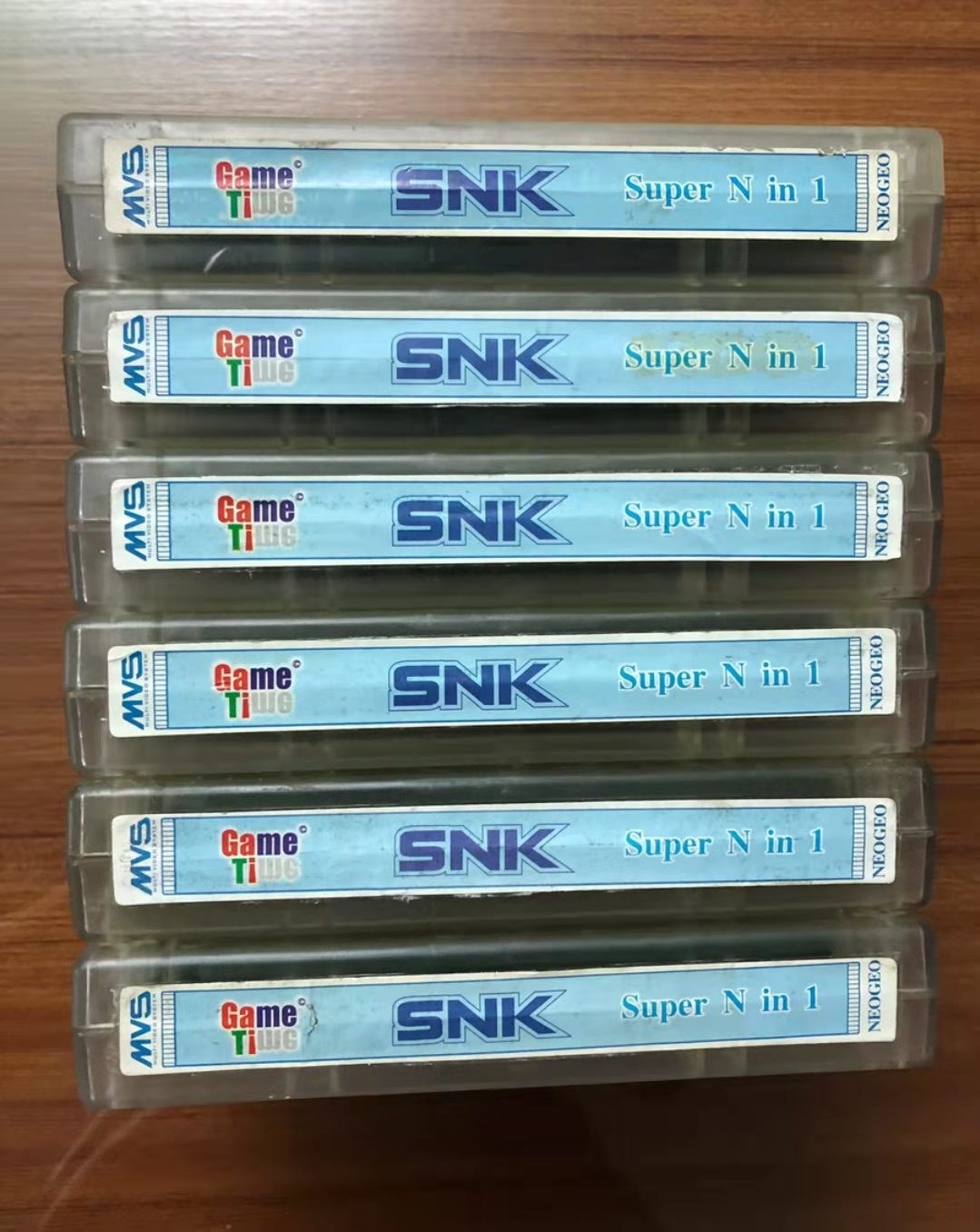 This has some games that the more common 161 in 1s does not have, like, finally a multicart with Windjammers!

Acording to the listing, these are the different games that It has over the 161 in 1

Also It has Garou, maybe Its the final version instead of the prototype ?

The only problem with it is the menu, which is all in chinese, but printing the list and gluing It on the cart would work fine.

Anyways, I just bought that, will post more info when It eventually arrives.

Thanks for the heads up! I just checked out their linked YouTube video where they show waku waku 7 running. We shall see...

"Don't show your whole hand yet"

Gotta leave more buyers hanging for the next one...

thalesalex said:
printing the list and gluing It on the cart would work fine.
Click to expand...

Is it on screen? If so, you can point a phone camera w/translate at it and it will display in English. Probably easier to print the list but still.

Wonder if Pick n Mix will work with it?

Time to start a collection of Chinese multicarts to replace our originals.

HornheaDD said:
Wonder if Pick n Mix will work with it?
Click to expand...

There’s also some sports game package on aliexpress too.

I wish it had Twinkle Star Sprites aswell, but at least I have the saturn port


skate323k137 said:
Is it on screen? If so, you can point a phone camera w/translate at it and it will display in English. Probably easier to print the list but still.
Click to expand...

This could work too, but I think the game names might be lost in translation.


HornheaDD said:
Wonder if Pick n Mix will work with it?
Click to expand...

Sadly even my green shelled 161 in 1 does not work with Pick'n Mix, I'm hoping this one works better in general because I'm having lots of issues with that green 161


Johnny16Bit said:
Time to start a collection of Chinese multicarts to replace our originals.
Click to expand...

In my case that chinese cart is the only way to get Windjammers, I just can't find the real cart in Brazil, only found a repro thats double the price of the chinese cart, even if I find It, It would probably be at a price I can't afford. So I'm putting my hopes on this cart working well.

Took the gamble as well and put in an order for a cart. Looking forward to testing it out.
M

Apart from Windjammers I think all the other games were present in the 138in 1.
A shame that the 138 in 1 is not for sale in Aliexpress anymore.

Just got mine delivered today. Only took 2 weeks but the audio is really bad. So far I've had audio issues on each game I've tried so far.

Well, here's at least a look at the cart and boards.

*Correction*
I took all the other games out of my 4slot and rebooted the cab with the multicart and all the sound issues are gone.
Should I be able to have other carts in my board at the same time?

Not with a multi cart inserted.

Hattori Hanzo said:
Not with a multi cart inserted.
Click to expand...

Okay thanks for the clarification.

I just got my hands on mine! it came with dirty contacts, and my mvs was not recognizing the cart, but after some cleaning with rubbing alcohol, it worked just fine!

my findings so far:

This cart was probably made for arcade owners in mind, I say this because to change the level of the games you HAVE to set DIP 4 and 5 to ON, if you do this and power the MVS, it will show two new columns on the gamelist: the left is for LEVEL settings and the right will be LIFE settings if a game has it. if you press A, selected game will change its level from 2-8, you CAN NOT choose LEVEL 1, and you set lives with B from 1-9.

For some reason, if you change the soft dip with the universe bios the games will plain just IGNORE what you set on Level and Lives and you will get whatever you set in the mentioned cart's menu... this might be awesome for arcade owners because you can set every game in one screen, but terrible and not practical at all for home/consolized users like me, because you can't simply change the levels as you please in the bios, you have to get up and set the dips on the board, which I personally DO NOT like touching, I might be wrong, but they feel very fragile... any other settings you change will be set just fine like time, blood, level/credit display, language, etc...

As a workaround, if you set the universe bios as CONSOLE, the game will respect the settings you set on the menus, so you could combine this with "PL1 Infin AES Continue" cheats to have an almost arcade-like experience (since not every game has all 8 levels in its menus) in AES mode, on power on it will display a garbled NeoGeo Intro but the list of games display as expected

But (maybe not so) good news!! Garou - Mark of the wolves is not the prototype romset, it is actually the Bootleg set garoubl.zip. Its the only set which has the white titlescreen with the name "GAROU Motw" on the bios, every other mame romset which is not the main garou.zip has "GAROU MOW" instead, IT DOES NOT CRASH WITH KIM'S C+D TOP MOVE! I didn't played a lot but the game seems stable BUT is scarily similar in size compared to the proto romset (36.7mb vs 36.6mb) both doesn't need garou.zip to work so I guess there will not be endings, which is sad... But at least its playable. I'll maybe cheat my way through just to check this quickly soon. Edit: Done it, doesn't have endings, just the same "Coming Soon" screen with "r family, pal!" text like the proto romset.

Happy to report that Windjammers, the game I bought this cart for, is working flawlessly!

Voice samples in NAM-1975 in the cutscenes are messed up, gameplay is fine tho, changing regions doesn't fix

I will edit this post later with some pics and videos to illustrate later. Also I will eventually make a printable list of the games.
Last edited: May 12, 2022

I got one as well for the hell of it. The only other quirk I noticed was if I went into the unibios/system test menu, the system time/date clock was ticking insanely fast. Doesn't seem to have any impact gameplay wise, but still interesting.

I’m still wondering why can’t they make a multicarts with all games on it.

I was going to post this later, but I'll do it now since I'll be out for the whole weekend, I did not had time to test if the print would even fit on the space on the cart, the idea was to glue the between the vents, but I included de xlsx file so you can customize it to your heart's content

Planning on making a custom label in the future too, I think the one they made are more blurry than it should

Got my copy of the multicart to use it with an MVS to AES adapter. The cart boots up and I can navigate the games, but can’t load anything. I’ve tried multiple button combinations, but no luck. I imagine this is because I can’t manage the dip switches. I understand an AES is not made for a cart like this, but I had some success with the 161 in 1 cart, so I wanted to try it out and share my results. I’ll play around with it once I have more time today.

Update: No luck, the goal is to eventually get an MVS so no loss. Again, this does not work with the MVS to AES adapters.
Last edited: Jun 3, 2022

I got one as well for the hell of it. The only other quirk I noticed was if I went into the unibios/system test menu, the system time/date clock was ticking insanely fast. Doesn't seem to have any impact gameplay wise, but still interesting.
Click to expand...

When you play bootlegs you age twice as fast. The clock is adapted for your safety. Don’t play too long or you’re dead!

Did you noobs not know that?

Evan said:
I’m still wondering why can’t they make a multicarts with all games on it.
Click to expand...