Boog's service will be privately held this Sunday, July 20th, in the morning in San Jose. Kit and I will be attending per his sister's invite. I will select an appropriate arrangement from our local florist (http://www.ahsam.com) and will attempt to decorate it with a few unique items to try and express Shawn's personality and hobbies. I'll find an appropriate Resident Evil game to represent him

Thank you to everyone who PM'd with your names. If anyone else wants their name/username to be added to the card, I'll be picking it up at Papyrus tomorrow and will print/prepare by Saturday afternoon, so please PM me sooner rather than later.

aria said:
I will put several items on hold for you.
Click to expand...


That's a bummer... But it's cool that he found his place here on this forum. I'm sure being a member here and meeting all you guys brought him way more happiness then any of us realize.

I've been away for some time and I gather from people's reactions that boog wasn't the first? Would anyone mind catching me up on the bad news?

And no, not tasteless at all Bobak... In fact, quite the opposite. Dude left a legacy behind here.

I don't know what's the right thing to say when it comes to things like these but Shawn was good guy, he always had a chill attitude and he was quick with the scoops. I'll miss you buddy.

My bad for forgetting to do this earlier, but I've stuck the thread.

Tango said:
I've been away for some time and I gather from people's reactions that boog wasn't the first? Would anyone mind catching me up on the bad news?
Click to expand...


Tony Gonzales (Nightmare Tony on this forum), former Romstar / SNK employee, very generous and kind hearted guy and a great asset to the community, died of Type 4 cancer in Fall of last year. His passing hit hard on a lot of people here. Go read the memorial thread stickied in Unrelated Topics.


We also lost another member, Breetai, to a car accident last month:

This is very sad news.

Whilst I am on and off on this site, I very much remember Boog, albeit I had very little interaction with him.

I do distinctly recall the boog psp gift. I happily contributed.

Inevitably after a while or so, some folks were bitter about it, in fact, whilst I was going back through some searches I stumbled across one of the subsequent threads. I won't link it, but had to read it, and it made me a little sad.

Within the same thread however, there is a (always) positive post from Boog saying how he appreciates it greatly, without getting drawn into unpleasantness.

I guess that’s also sad too, but it’s definitely something to remember and admire.

He was someone that didn't get a great hand of cards dealt with in his life. But with what he had, he made the most of.

He was limited in what he could do, but that didn't mean that he wasn’t able to enjoy his limitations.

The old PSP was a gift from the members of neo-geo.com and I will always treasure it and never sell or trade it ever.

Boog, I can’t promise that I will be able to follow your example, but I won’t forget you, ever.

May I suggest: creating a memorial sub-forum?

Statistically, as time passes and the median age of forum rises, were going to inevitably lose more people to various reasons.

Another soul carried on through us all. Shawn you were a complete asset to this community, and you will never be forgotten!

It put a big smile on my face to see you more active in chat just before Christmas.

I've been gone the last few days due to being sick and having a lot of work and this is the first thing I see.

Shawn was definitely one of a kind here and that's what we liked about him the most. We will sorely be missed. My deepest condolences to all his family and friends.

It was a beautiful service, sad but inspirational with a celebration of life. Shawn was always a positive person, with never a bad word to say about anyone. He had an amazing family that Kit and I got to meet, and he will be missed by many.

No one else was performing any photography, so I just took a couple of quick pictures so as not to stand out.

Here is the card I picked up at Papyrus. I put down a few quotes made by some of the members in this thread, and attached a list of people who wanted to have their names signed with decorative paper on both inside covers. 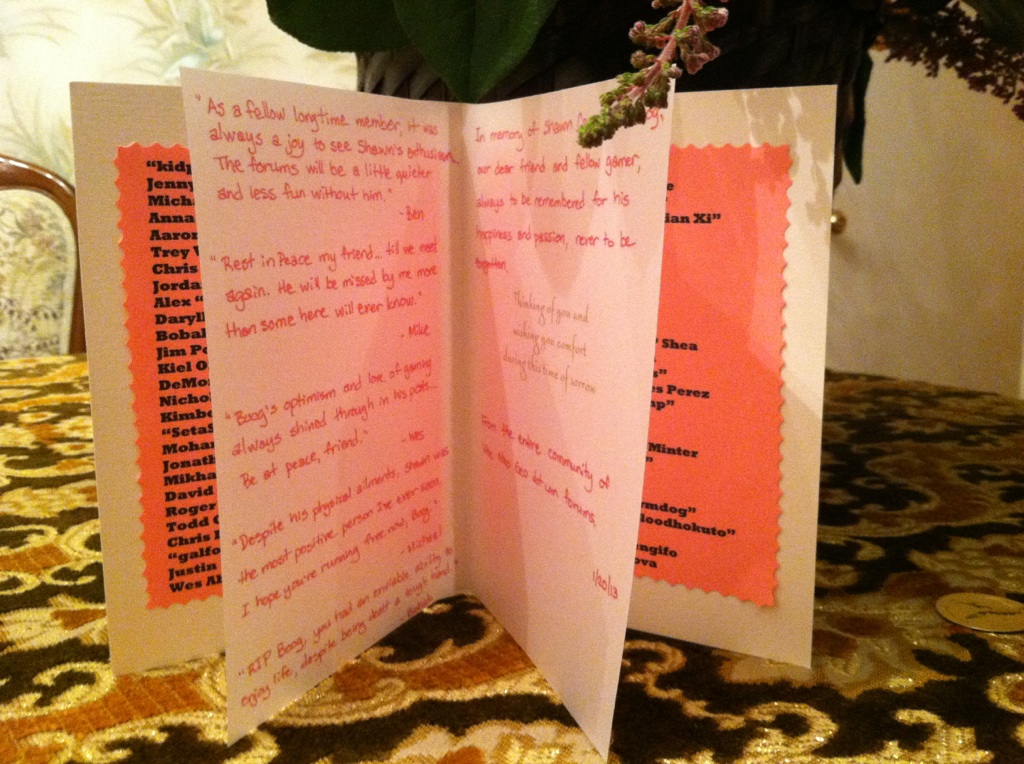 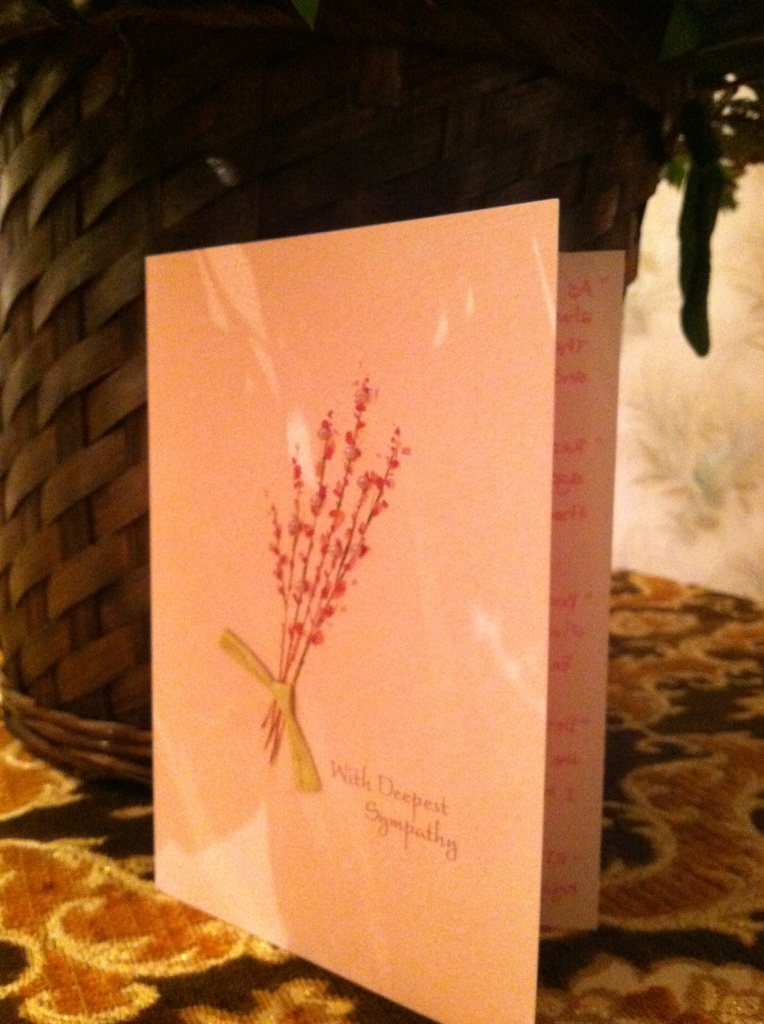 The arrangement was a Deluxe Spring Hope from our local San Mateo florist, a beautiful combination of spring flowers. The funeral home director allowed me to place it directly in front of the speaker podium and it was in place there for the duration of the service, right in the middle of everyone's view. 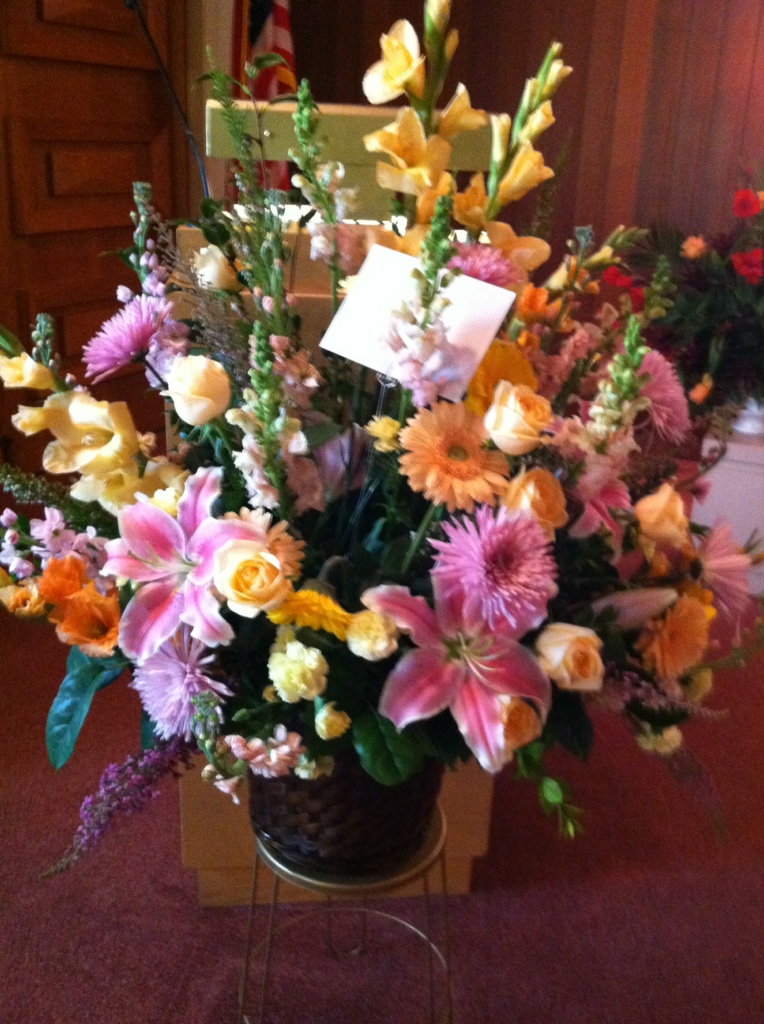 Shawn's wall of pictures visible upon entry into the funeral home. 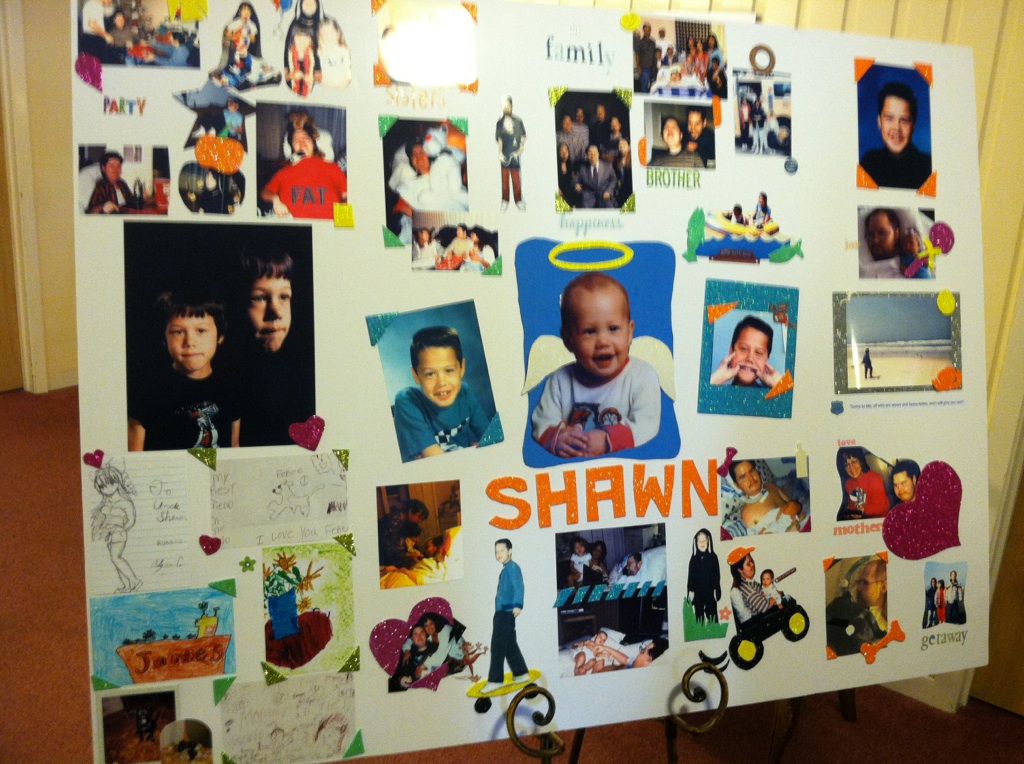 And a couple of pictures to show the overall view of the ceremony hall. Shawn was surrounded by Tiggers, his favorite animal. Our flowers are on the left, in front of the podium where the sermon was conducted. 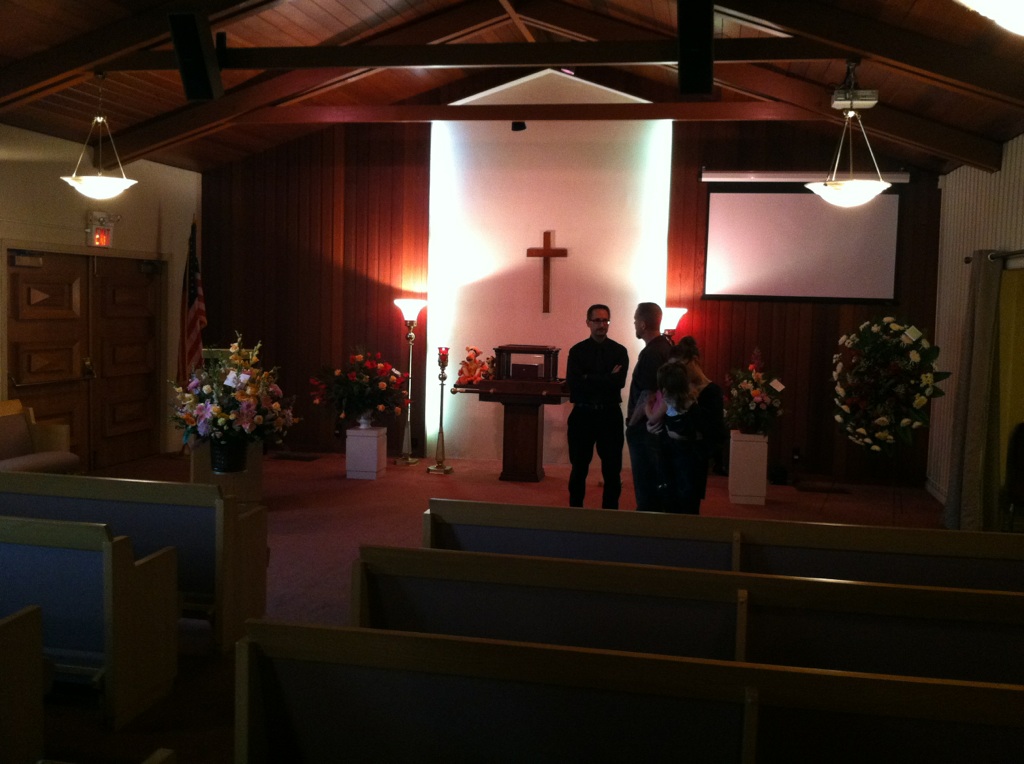 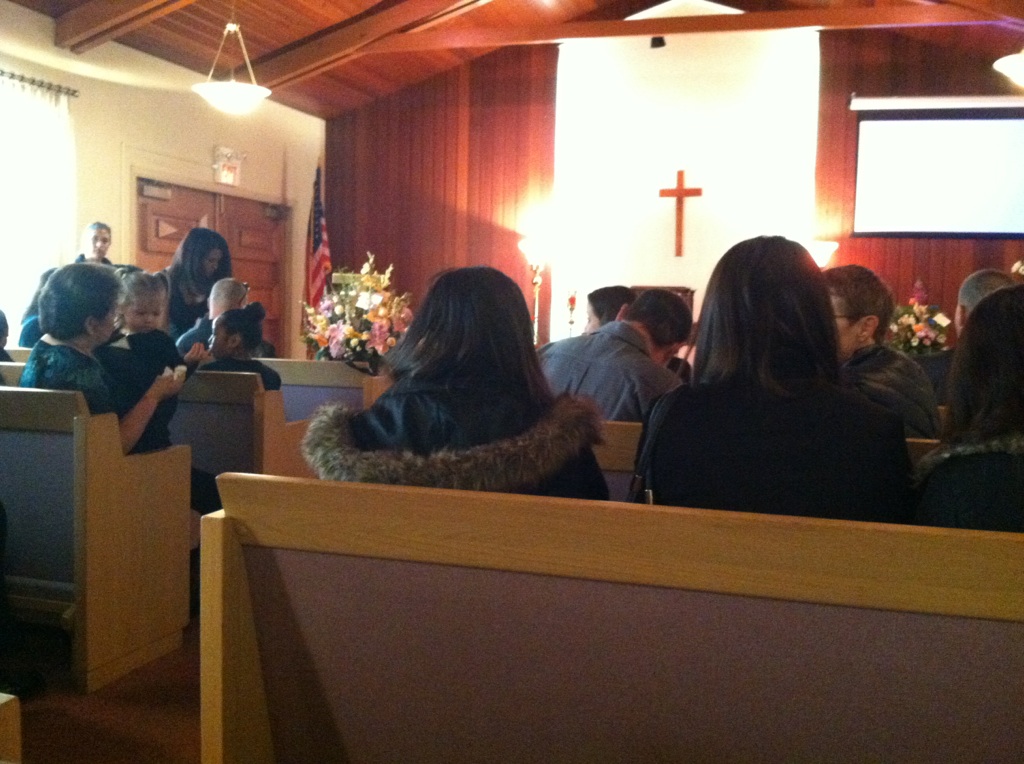 The family was comforted by our condolences and very happy to hear that Shawn had a large community of friends who cared for him. The most important thing to Shawn was forming relationships, and that was evident in how many of us cared for him. May he rest in peace.

that is very nice mikhail. thanks for representing!

Thank you for helping organize this Mikhail, it means a lot to us all.

Thanks for the pictures, Mikhail.

Thank you for taking your time to get some representation of everything! Very touching.

Thank you Mikhail, you are truly a man among men!
S

Leader of The Hyperstone Heist,

May you be blessed for eternity for this noble deed, Mikhail.

Props for the hard work, noble representation-and cheers to Kit as well.

Mikhail, that's awesome man. Nice job on everything. I'm not the most spiritual guy on the planet, but I do hope that the Boogster is able to somehow appreciate it.

Thanks guys for doing this. I'm still in shock over this.

Thanks for the pictures mikhail,i'm still in shock over it to

Same sentiments here....that was a noble task you took on and I really appreciate it.

Seeing the photos got me a little choked up. Had a few relatives pass this past year so maybe I am just sensitive. Partly it just made me think how others scoff or laugh at the idea of making friends and talking to people online, but in reality that is what some people have to due their disabilities or limitations. I think it is great that we unite as a community when bad things happen. Sure we may be ruthless and outlandish, but I have never seen another forum that comes together so well during the tough times.