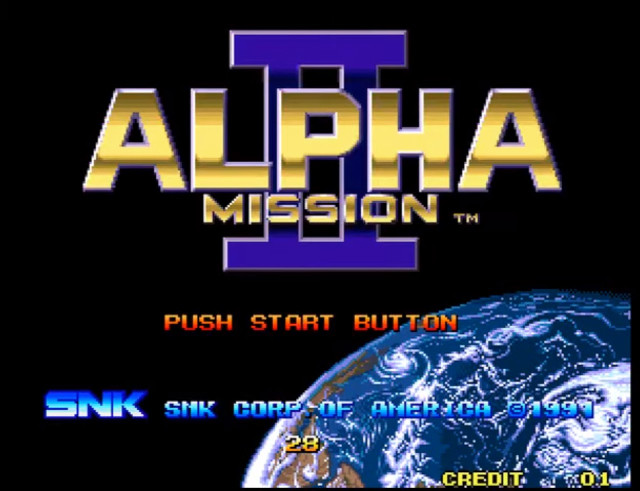 The sequel to SNK’s seminal 1985 arcade release, Alpha Mission II gave early Neo-Geo fans a well-rounded, but often times unfair vertical shooter. While not as polished as later shmups, it is the best of the early SNK shooters on the hardware.​

The general gameplay loop of the Alpha Mission series is most akin to Namco’s Xevious where you can shoot directly ahead of your ship and drop missiles on the ground below. Mastery of paying attention to both the foreground and background plane is paramount to excelling at the game. That said, unlike its contemporaries of the day, the Alpha Mission series difficulty is less to do with enemy placement and more to do with its obscure power-up and armor systems.

While traversing the hazardous stretches of interstellar space, the player must shoot small blue ships in order to gain basic power-ups for speed, laser shots, money, and missiles all while dodging enemy crafts and fire. Each type of power-up has 4 levels you can build, but there is no meter to let you know when you’ve reached the max. Rather than extra power-ups providing bonus points upon collection, once you collect all 4 power-ups of a certain type, the next power-up of that type will take away all upgrades you’ve collected thus far. Why the game punishes you this way is beyond me, and the removal of this mechanic would make the game far less frustrating to get into while still retaining the difficulty you expect from an arcade game.

The power up system also borrows some cues from TwinBee in that you can shoot your power ups to change them into something else that might be more desirable. This doesn’t always work in your favor, so trying to dodge power-ups you don’t want while also dodging enemy fire can get tricky – especially at harder difficulties.

As if the game doesn’t sound difficult enough, you also collect money (indicated by a G power-up) to purchase armor for your ship in between stages. There are multiple types of armor that not only add protection, but also provide different types of guns or screen clearing effects like blackholes or a giant flame thrower (not really sure how a flame thrower works in the vacuum of space…). You can also collect armor pieces in the stages by shooting particular squares on the surface with your missiles. Each armor type has three pieces you must collect in order to add the armor to your menu. Beware, though, because if you have two pieces of the Shield armor (for example) but get even one piece of armor of another set, you lose the pieces of the shield armor you've collected. 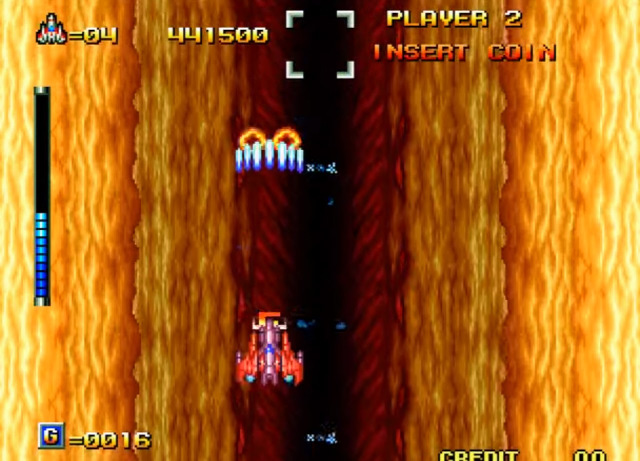 To make this mechanic even more convoluted you have to equip your armor. In order to do this you have to press the C button to bring up a menu and use Right or Left to select the armor you want to equip. You then press the fire button to select your armor. While this sounds well and good, the game NEVER stops around you, which means the armor menu takes up screen real estate and your selections on the menu also move your ship! This is inelegant to the say the least, and is a byproduct of “always on” arcade design. If you have a Unibios installed in your console I HIGHLY recommend setting your Speed, Laser, and Missiles to max, so you only have to deal with collecting money and managing your armor. It makes the game MUCH more manageable and enjoyable to play.

Despite numerous frustrations, Alpha Mission II is actually a good game, and many people speed-run it or go on score runs to this day. That said, it’s a bit too convoluted for many modern gamers, so you may want to try it via emulator or the Arcade Archives release before you spend your hard-earned money on an AES copy. Both Japanese and US copies run around $200-$300. The US version has the highly sought after "dog-tag" on the spine making it a bit more desirable to collectors than the cardboard boxed Japanese edition. Of course MVS and CD versions will run a bit cheaper, but not by much.

Should you buy it? Well, that's tough. If you LOVE vertical shooters, you could do worse on the Neo-Geo (Ghost Pilots), but you can also do better (any others). If you're just building a Neo-Geo collection from scratch, save this game for a later purchase. The price isn't really in flux right now, and it's a rather common title. There are much more important games in the Neo-Geo library to go after well before you dive into Alpha Mission 2. Save your pennies and get Sonic Wings 2/Aero Fighters 2 instead.