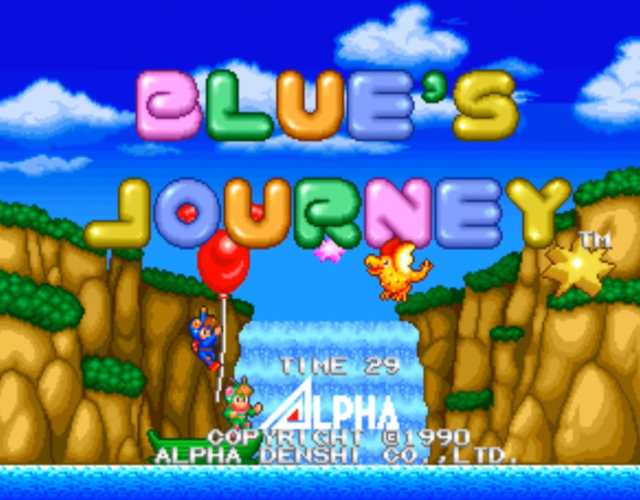 Like all side scrolling games on the Neo-Geo that aren't Metal Slug, Blue's Journey is just okay. That said, it has many innovative gameplay hooks in its 2-player co-op mode that were way ahead of its time. While it won't blow you away, this is as close to a Mario style platformer you're going to get on the Neo-Geo.​

Blue's Journey is one the earlier releases on the Neo-Geo, coming out as a launch window title in the arcades and making it to the AES in mid-1991. While it may surprise modern gamers, platformers were not uncommon in arcades in the 80's and 90's. While usually hit or miss, there are some standout titles like Capcom's Strider or the Makaimura (Ghouls & Ghosts) series. Blue's does not stand up to those classics, but it does bring to the table true co-op play in the style of the more modern New Super Mario Brothers (NSMB).

The story goes: An evil empire wants to steal the planet Raguy's natural resources and pollute the galaxy. Blue sets out to save it. That's it. I wonder if Blue can come save Earth when he's finished?

Gameplay is simple with a jump button and an action button. The action button controls the weapon you have equipped and also throws captured enemies. The default attack is a leaf Blue throws down to stun enemies allowing you to pick them up and throw them at other enemies. You can also jump on the heads of enemies to stun them, or collect a few different power-ups that take the place of your leaf and kill enemies out right. It isn't ground breaking, but the controls are tight and the mechanics work well enough.

Blue can also press the C button to turn into a chibi version of himself. This is a pointless gimmick that you only use two or three times to go down a hole to a not-so-secret area. You can jump higher (not that you'll ever need to), and can't attack. That's all - this blip about it was an afterthought, just like the actual mechanic in the game.

What will take you by surprise, though, is how well co-op play works. Both characters play at the same time and can ride on each other's head, or use each other as a weapon mow down enemies. When one character dies, they ride back in on a red balloon (like in NSMB when you come back in a bubble). While on the balloon you have some control over your trajectory, so you can use it to skip past a particularly tricky area. The general flow of co-op play is so similar to NSMB that you wouldn't be wrong to wonder if Nintendo took cues from this game when trying to figure out a winning formula for co-op Mario Bros. Sadly, each character is 100% identical except the second player Blue is orange - but it still called Blue. 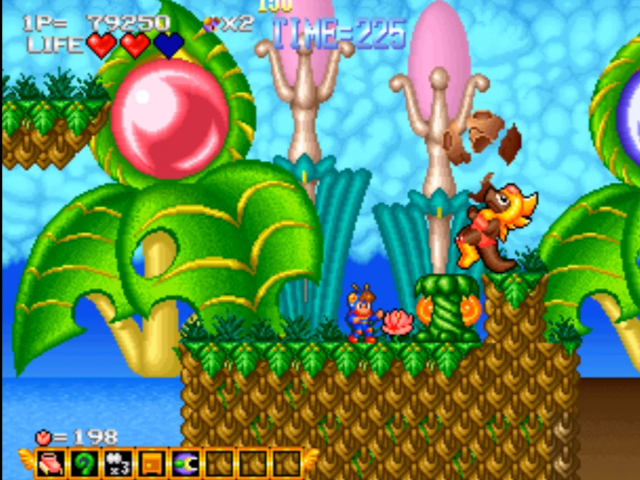 Throughout your adventure you can go into Mushroom houses to speak to a fairy that will sell you items using the flowers you've collected. Honestly, I never saw a need to purchase anything in the game as the game is quite easy as it is and any buffs would further imbalance an already easy game to your favor.

Unfortunately the good news stops there, as solid mechanics can only go so far when the game is marred with not bad, but bland level design. The game is too easy, and there are no really challenging platforming sections. Enemy placement is a mixed bag of clever and annoying as well.

Like many early Neo-Geo games, you can tell the game was rushed out of the door in order to have a varied launch window line up. Glitches abound in 2-player mode. The camera just can't keep up with two characters on screen doing different things, and the game will often load in off camera parts of the level which hang in the air and keep glitching in and out of existence until the game has a chance to catch up with itself. Speaking of, the game can have 6 character sprites on screen and slow down worse than any Metal Slug game with dozens upon dozens of sprites on screen. I'm talking 20fps slow. It's not only jarring to go from 60fps to 20, but it also makes the game nigh unplayable. The game is just not programmed well, and it's a shame too.

Blue's Journey, like many early Neo-Geo, is a whole heap of missed opportunities wrapped in a mega meg cartridge. It has solid co-op play, satisfying platforming mechanics, and a beautiful pastel world to play in. Sadly, it's marred by bland level design, the worse slow-down I've ever seen on the Neo, glitches galore, and it's super short. With a friend you can easily beat it in 30 minutes or so.

Should you buy it? No, not the AES version at least. Like many early titles in the library, it shouldn't have a high price tag but these games keep going up in value mostly because of skewed expectations on Ebay. But, since Ebay basically controls the modern retro market, be prepared to pay upwards of $200 for a CIB US version and around the same price for the Japanese version in a carton box rather than a plastic case. For $8 you can nab the Arcade Archives release on modern platforms, and for this price I say go for it. It's a fun, quick romp with a buddy or a decent time by yourself. Just temper your expectations. If you haven't played many Neo-Geo games, don't base your opinion of the console on this game. I wish Blue's Journey had sold better initially, as I feel a sequel would have given ADK another shot to iron out the kinks and make something truly special - because they really missed the mark here.