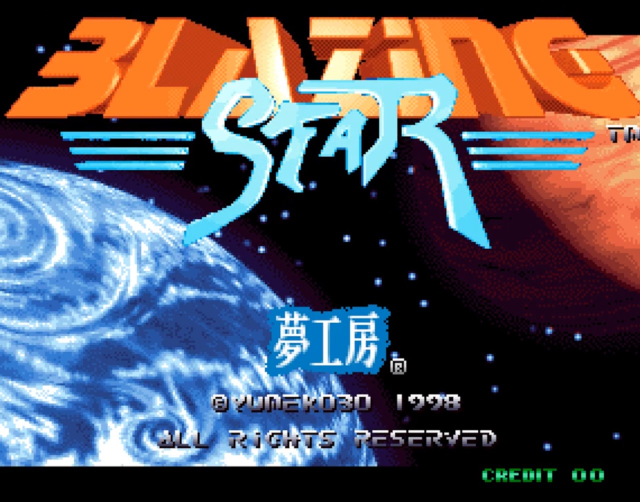 Blazing Star is one of the most beautiful horizontal shooters you'll find on the Neo-Geo or any arcade set-up. The fast, fluid action is second only to Pulstar, and the sheer amount of spectacle will blow you away. That is, if you can afford to play it on real hardware...​

Blazing Star was released during the very height of SNK's hey-day in the arcade, right before the sharp downturn of both the arcade industry and SNK themselves just two years later. Upon its arcade debut, Blazing Star was a critical darling with many outlets praising SNK's choice to release a horizontal shooter in an age where this genre was looked at as being passe. It saw some modest success in the arcades in both the East and West, but had little to no chance of seeing success in the home market due to the scarcity of the Japan exclusive AES release and no release on the Neo CD or any other console of the day.

Aicom, the development studio behind the 1995 Neo-Geo masterpiece Pulstar, was brought in house under the SNK umbrella and was renamed Yumekobo. Their first task? Create a sequel to Pulstar that wasn't quite as difficult that would sell better in the Western markets. Unfortunately, sales numbers are hard to find, but the total absence of the game in the home console market tells us all we need to know. You can check out a few developer interviews for the game at Shumplations for more information - I highly recommend it.

At the outset of Blazing Star you have to choose one of 5 characters to begin your journey. Each ship has its own strengths and weaknesses that will affect not only overall gameplay difficulty (apart from the difficulty settings), but will also fit your play style. Ships range from all-around fighters like Hellhound, more defensive ships like the Peplos, and even the Dino 246 from Pulstar makes an appearance. Each ship has their own unique type of normal shot and charge shot. Finding the ship that works for you is paramount for your enjoyment of the game. My personal favorites are the Hellound and Dino 246. If you've never played before I recommend the Windina as it has the widest normal shot that covers a good bit of the screen in front of the ship at full power.

Even though Blazing Star is the direct sequel to Pulstar, aside from a charge shot mechanic, the two games could not be more different. Pulstar definitely pulls its inspiration from Irem's classic R-Type series, and Blazing Star feels a bit more like Tecnosoft's Thunder Force series in its moment to moment gameplay. Rather than filling the screen with baddies and bullets like Pulstar, Blazing Star has more choreography and less chaos in its enemy patterns and never feels quite as frantic - until the end game. Blazing Star has 6 full stages and a 7th stage that comprises the final boss battle. Despite the focus on creating a more approachable game, there is a stark difficulty spike on stage 4 that continues to build. On normal difficulty I can easily breeze through the first 5 stages in one life, but when I get to the stage 6 boss that is when everything breaks down. 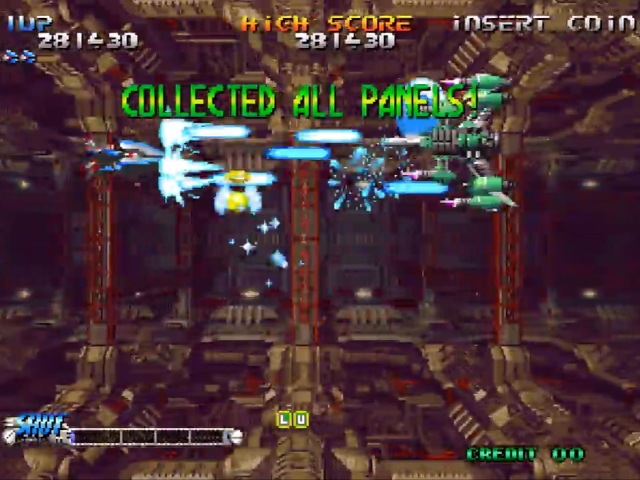 "Get it more!"​
Speaking of the bosses, they are huge, screen filling mechanical monsters that really feel threatening. Like most horizontal shooters, once you get their patterns down you feel like a god as you rip through them. That is, until you get to the last two bosses in the game. The stage 6 boss is a multi-stage battle against a gargantuan battleship that takes roughly 7-10 minutes to defeat based on your skill level. The battle is so difficult, and patterns so erratic compared to everything that has come before that it's more of a test of tedium rather than patience and perseverance. The final boss in stage 7 is hard, but the battle is much shorter and the patterns much easier to discern than the stage 6 boss. Because of the difficulty spike in stage 4, and the ridiculous last two bosses, the overall difficulty ends up feeling uneven. It's not impossible to 1cc this game, but any sort of ego you've formed on your performance up to the end game is shattered once you reach the final two bosses.

The general gameplay is mostly what you'd expect from a late 90's horizontal SHUMP with a few twists. Like most shooters, players power up their ship by collecting power-up items. You can collect 4 power-up items to reach your ship's maximum power level. These affect the size and spread of your normal shot as well as your charged shot. Rather than having a screen clearing bomb like most other shooters, once you unleash a charged shot you can press the B button to break up and scatter your fire to fill more of the screen. The more power-ups you've collected, the stronger this mechanic will be. Additionally, the faster you press the shot button, the more powerful each normal shot will be - indicated by a change in the color and frequency of your normal shot.

Along with your power-up items, Blazing Star also has multiple types of score multipliers you can collect. There are five LUCKY panels in each stage to collect, one panel per letter. If you collect all five you get a huge score bonus at the end of the stage. There are also normal score panels to collect, and these little angel things called Event Icons that do...something. Honestly, I've never been able to discern what these do as they don't impact the gameplay in any meaningful way.

Like Pulstar before it, Blazing Star is a beautiful game that mixes CG created assets along with highly detailed hand-drawn assets to create a visual style unlike any other shooter of the day. The Neo-Geo's color pallet was put to good use, and every stage is filled with depth. Because of the huge size of the game's memory, Yumekobo had space to include a few FMV sequences that loop in some backgrounds to create a neat sense of depth and realism that blend well with the rest of the sprite work. Enemies are all lavishly animated, and many enemy ships transform into other ship types on the fly. Bosses, as sated before, are huge and highly detailed with loads of animation. I wouldn't go as far to say Blazing Star is a more handsome game than Pulstar, but it is hands down one of the most beautiful Neo-Geo games of any genre.

Music and general sound design is also a high point. The developers put the Neo-Geo's Yamaha audio chip to good use with great, high quality samples mixed with a few channels of FM synth. While I like the overall composition of Pulstar's music better than Blazing Star, Blazing Star "sounds" better.

Because Blazing Star is mostly presented in English regardless of your console's territory setting, you'd think they would have put a bit more work into ensuring it makes sense. Unfortunately, or fortunately if you want a good laugh, the "Engrish" is just horrendous. Messages like, "Get It More!" and "Hey Poor Player!" pop up when you get a score panel or lose a ship, and each boss has some unintelligible message that comes up right before the fight. It's wonderfully bad, and gives the game a delicious 90's old-school charm. What's more, every time you grab a score panel the "announcer" screams, "BONUS!" There are a lot of score panels to collect, but thankfully you end up drowning this out as you get more and more into the "zone" as you play.

As a quick aside, the modern meme "fail" is thought to have originated in this game with the game over quote "You Fail It!"

Blazing Star is a wonderful shooter, and if Pulstar didn't exist I'd call it the best shooter on the Neo-Geo despite its balance issues. That said, unless you are playing on the MVS arcade board, you won't be playing this game on original hardware. SNK released a paltry few AES editions only in the Japanese market and as such Blazing Star is one of the most expensive Neo-Geo AES games of any territory sitting around the $5000 mark in the 2020 retro game market. Thankfully the MVS cartridge can be had for right around $300, give or take. Unfortunately, there was no Neo CD release and no console ports from the day. Due to the game's scarcity, many people wouldn't begin to discover the game until it was released on the Wii's virtual console and mobile devices in 2012,. Since then there have been other releases on SNK's mini consoles, and most notably Hamster's Arcade Archives release. A by product of gamers not being aware the game existed until the modern age, retrospective reviews of the game are even more positive than when the game first came out.

At the end of the day, if you like horizontal shooters you must play Blazing Star any way you can. If you don't like SHUMPS, then there won't be anything here for you to get you into them - but at least you'll get a good laugh at the horrible translation.

Visit www.bokujinsroom.net to find more reviews by Yagamikun for the CPS2, PGM, and more!
Reactions: MySoberCompanion