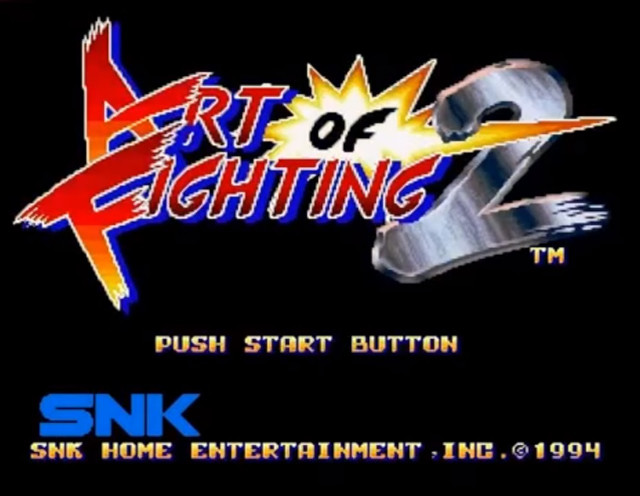 Art of Fighting 2 is a fantastic follow up to the first game. The huge sprites, unique gameplay, and wonderful use of color easily separated this game from the crowded fighting game scene when it came out. Many fans believe it to be the strongest entry of the three games in the series. While not perfect, this is an essential Neo-Geo purchase that holds up great even 25 years later.​

By 1994 the fighting game scene was getting crowded: five versions of Street Fighter 2 by this point, Mortal Kombat 2 and Darkstalkers were releasing soon, and the technical powerhouse that is Killer Instinct loomed over the horizon. In a crowded pack of CRT wolves vying for your quarters to much on in the dingy arcade, Art of Fighting 2's huge sprites, smooth animation, and incredible attention to detail really stood out in the crowd.

The story is a direct follow-up to the first game which ended with Ryo Sakazaki and Robert Garcia rescuing Ryo's sister, Yuri, from Mr. Big and his henchman Mr. Karate. In the opening attract sequence for Art of Fighting 2 you discover that, GASP!, Mr. Karate is actually Takuma Sakazaki, Ryo's father! The story picks up from here with Takuma now joining Ryo, Robert, and Yuri who go after Mr. Big and his boss Geese Howard. Yes, THAT Geese Howard from the Fatal Fury Series.

Rather than restrict single player mode to Ryo and Robert like the first game, SNK allows you to choose any of the 12 selectable fighters from the get go. All characters return from Art of Fighting 1 and four new characters were added: Yuri, Takuma, Geese, and fan-favorite Eiji Kisaragi. Geese is a "secret" boss you can play against so long as you don't lose a round (not a small feat in this game) through single player mode. While you can use a Unibios cheat to play as him, he is broken beyond belief. Each character comes with their own background and music track. 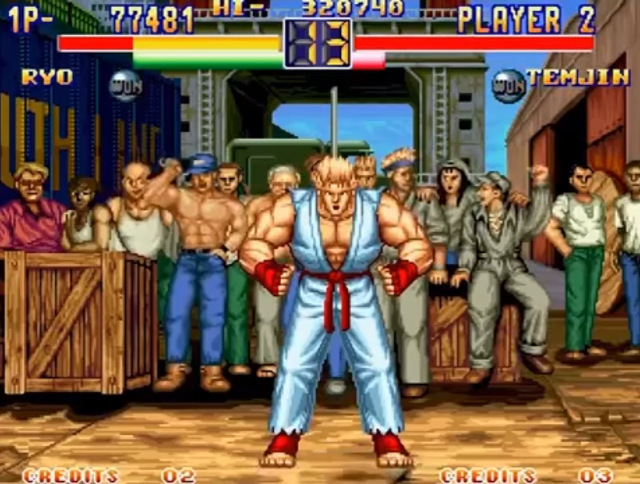 The overall gameplay of the Art of Fighting series is simple. You have two attack buttons, one button for throw, and one button for taunt. Each of your attack buttons (punch and kick) are pressure sensitive, meaning a light tap will be a light attack and holding the button will do a hard attack. All special moves require the use of the "spirit gauge", which sits under your life bar. Each special move uses a different amount of spirit. When you begin to get low on spirit just hold down an attack button to slowly build your gauge back up. Beware, because your spirit gauge will drop when the opponent taunts you, so use your taunts wisely! There is a great cadence to the battles because of the spirit gauge mechanic. Because you are constantly trying to find little openings to build meter, you have to use your special moves wisely. You must also have a keen understanding on how much meter each special move uses. There is a lot of strategy here, and it is satisfying with it finally clicks.

While this sounds all well and good, SNK made the AI on this game ludicrously difficult on all levels. That said, once you get the gameplay flow down, it isn't entirely insurmountable. If you have a buddy to play with that also knows how to play, the game really opens up and a lot of fun can be had here.

In an arcade with dozens of CRT monitors flashing colors, characters, and hadokens at you to get your attention, the one BIG selling point of this game is its gargantuan sprites. Seriously, these are some of the largest player controlled 2D sprites in all of video games. Not only are they huge, they are also very detailed and well animated. The characters even show physical signs of injury when they take damage. The backgrounds are well drawn and colorful as well. Some are really great, but overall they just aren't as memorable as stages from SNK's other flagship series'. This is a small gripe, though, as AOF2 is still a very handsome game.

Like the first AOF and Samurai Shodown before it, AOF2 scales back the camera to show more of the play field the further the characters get from each other. While this scaling effect works very well in Samurai Shodown, it's feels a little less smooth in the Art of Fighting games.

Music ranges from okay to great with Yuri’s theme easily getting stuck in your head for days. Voices are varied and there are a ton of them. A weird choice SNK made was putting in alternative voices for King and Mack when the game is played in US or European coded systems. These voices are absolutely terrible and makes King sound like a 75-year-old women with emphysema who still smokes 5 packs a day. Make sure to set the language option to Japanese to get the correct experience. If King doesn't sound like she does in the King of Fighters games, you know you've got it wrong.

AOF2 is going to wow you with its huge sprites and good looks upfront, but its gameplay will take some time to warm up to. It’s a solid effort and well worth your time, especially if you have a buddy to play with. The AI is, like many early SNK games, much too difficult for its own good.

That said, AOF2 is still one of the best bang for your buck titles and should be in every collectors library given its absurdly low cost of less than $60 USD for a complete Japanese copy on AES. The MVS and CD versions are also very cheap. While I’d recommend trying it on emulator or the Arcade Archives release first, you won’t be disappointed if you blindly purchase it for your AES collection either. Art of Fighting 2 is an essential purchase for all Neo collectors. Just spend some time getting familiar with the gameplay loop, as this series plays very differently from all other fighting games you've ever played.