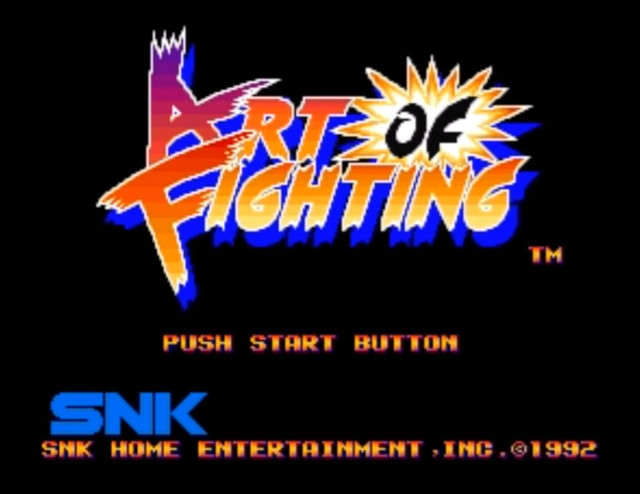 SNK's second fighting game is a wholly original take on the budding fighting game genre. While its characters are better known to the world than the overall series (thanks to King of Fighters), Art of Fighting was a groundbreaking title from 1992 that is still a joy to play today.​

1992 was a big year for fighting games. After the runaway success of Capcom's Street Fighter 2 and SNK's own success with Fatal Fury in 1991, it was only a matter of time before SNK entered the arena with another original title to combat the Street Fighter 2 juggernaut. In the Western arcade market, Art of Fighting didn't just have the likes of Capcom to deal with, they also had to contend with Midway's obscenely violent Mortal Kombat.

Despite being a bit lost in the shuffle of the slew of clones that had come out in the year since Street Fighter 2, Art of Fighting was one of the few games that, like Mortal Kombat, didn't lean on the mechanics of Street Fighter 2 to create a compelling experience. Rather, Art of Fighting stands as one of the most original and influential fighting games to date; introducing many mechanics, systems, and graphical effects that are still in use over 30 years later. While I've never been a huge fan of the pacing of the Art of Fighting series, it certainly does have its fans and for good reason. Lauded as the best of the series by many fans, Art of Fighting is still beloved today in SNK and Neo Geo fan circles. Let's dive in and see what all the fuss is about. 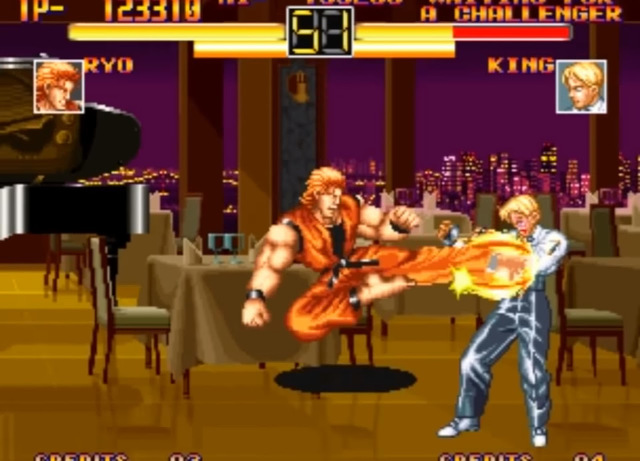 In order to stand tall against the growing crowd of fighting games in arcades in the early 1990's, SNK knew their new fighter had to stand out. Using the sprite pushing power of the Neo Geo to full advantage, coupled with the massive 102 mega bit cartridge (about 13 mega bytes) at the time, Art of Fighting introduced the largest player sprites of any game character the world had ever seen. Each character is at least as tall as half the screen, with most being 3/4 the height of the screen. These highly detailed, colorful, and well animated, hand-drawn characters really pop off the screen. They easily drew the attention of eager arcade goers wanting the next big thing.

Traditionally, fighting games keep the players' characters locked in a 4:3 box with the screen scrolling a bit to the left or right of the arena depending on the relative placement of the sprites. Always the innovator, SNK used the sprite scaling technology baked into the Neo to pan the camera away from the center of the action while scaling out the background and scaling down the character sprite sizes. At full scale you can see almost the entire stage layout. No other game hardware at the time could produce such dramatic effects, and it was a real graphical show stopper. 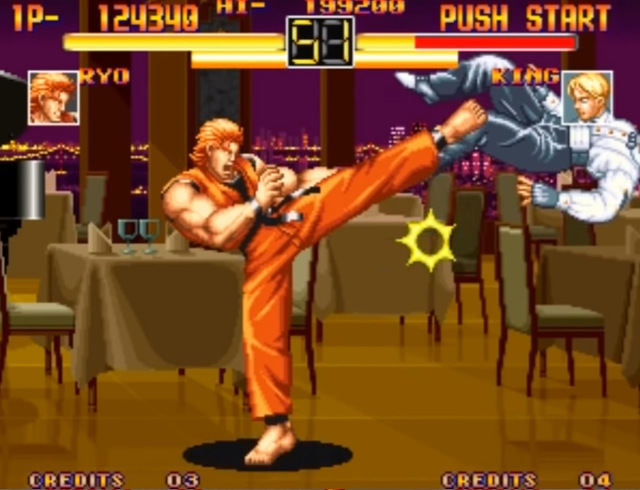 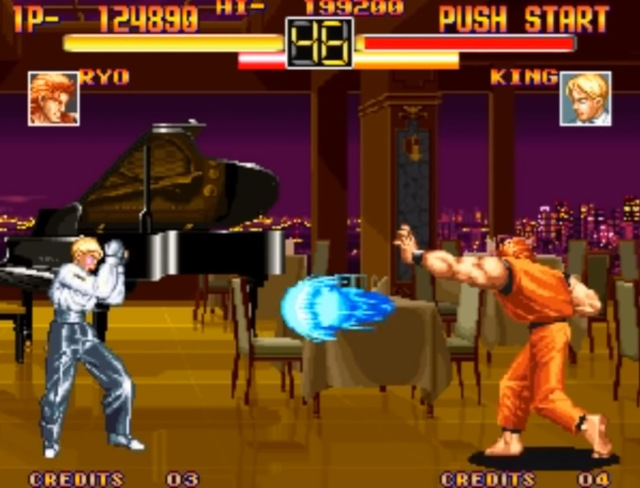 Scaled back​
Not only are the sprites and scaling effects impressive, SNK took the graphical effects even further by adding in real-time damage to characters as each round progresses. The more damage the characters take, the more cuts, scrapes, bruises, and bumps show on their sprite. Further, if a character is defeated in a certain way their upper body clothes will be ripped away revealing even more damage. To my knowledge the first two Art of Fighting games are the only two fighting games ever to produce this effect due to the massive size of the sprites being able to show off such minute detail. Suffice to say, despite its age, the look of Art of Fighting holds its own even 30 years later. This is one handsome game.

Compared even to Fatal Fury 2, which released a couple months later, Art of Fighting has a simple button set-up: A punches, B kicks, C is throw, and D is taunt. You can throw by pressing forward or back plus C. All characters have at least three special moves done by inputting a series of controller motions similar to Street Fighter 2 or Fatal Fury. Unique to the Art of Fighting series, the spirit gauge dictates your special move usage. Each special move you use takes a chunk out of your spirit gauge, and each special move will decrease in size, speed, power, and range as the gauge depletes. You can hold down any attack button to power-up and refill your gauge, but watch out! Opponent taunts will deplete a large chunk of your gauge! While there are fans and detractors to this mechanic, it prevents the fireball wars from Street Fighter 2 and makes you think more critically about every move you make as you carefully balance your attacks. Like most early fighting games, there isn't a purposefully designed combo system here, but certain moves can interrupt other move's frames to create simple two-in-ones. This is the exception rather than the rule, making Art of Fighting more about well placed normal attacks and careful use of specials rather than trying to create impressive, multi-hit strings.

One final mechanic that will go on to influence just about every other fighting game in its wake is the desperation move (read: super move). This is the first comeback mechanic in the genre where you gamble on a high-risk, hard to execute move, but receive a big payoff if the move connects. This mechanic can turn the tide of battle around instantly in your favor. While subsequent fighting games have these moves available from the get go, when playing single player you can only learn these moves after completing a mini-game about mid-way through the story mode.

The game is set up in two modes - Story and Vs. In story mode you can only choose from Ryo Sakazaki and Robert Garcia - two best friends who are out to find the kidnapper of Ryo's sister, Yuri Sakazaki. In Vs mode two players can choose from the full roster of 10 characters minus the boss, Mr. Big. While not the most original cast in the world, there are some standouts. King, for example, is the first cross-dressing, androgynous character in fighting games (who has a secret crush on Ryo that is played out in many subsequent games in the AOF and KOF series).

Music is great, with SNK's sound team really coming into their own in this release. The iconic first stage music in the Todo dojo has gone on to be synonymous with the Art of Fighting characters with the theme receiving many variations and remixes across the storied King of Fighters series. Sound effects are also well designed with a hollow "POOOOWWWWWW" when you land a hard blow that has also become a series staple. Voice work is good overall, but it is easily the weakest in the series when compared to later entries.
Art of Fighting is a true classic that is still fun almost 30 years later. The compelling story, characters, and art direction are solid, and the gameplay is still fast and fluid. I wouldn't say it holds up as well as Street Fighter 2, but certainly more than most other fighters of this era, including the first Fatal Fury. Thankfully, if you're looking to play

Art of Fighting on real hardware you'll be glad to find out that it is one of the cheapest games you can get on AES, MVS, or CD - with the AES version being the most expensive at roughly $80-100 for a good condition Japanese copy and around $150 for a US release. MVS carts can be had for as little as $25, though. Art of Fighting has seen plenty of ports over the years in various releases and compilation packs. Modern gamers can pick it up for $8 on Hamsters brilliant Arcade Archives release. While I wouldn't call it an "essential" first purchase if you're just getting into Neo Geo collecting, it should definitely be on your list as the legacy of this game still caries significant weight today. It is a fantastic relic of the by-gone days of the 1990's arcade scene, and a fun go-to game for ardent fighting game and SNK enthusiasts.