I know this guy gets some flack here but in fairness, his last 2 or 3 SNK predictions were bang on the money, months in advance. He seems to have very reliable SNK contacts...

Not sure what they're looking to accomplish with a new platform. No way it'll be as powerful as current or next gen consoles. Might be they're going for 2D only.

If it's just yet another way to release old Neo games, then...meh.

I'm trying to understand who this might appeal to. He mentioned Indy developers possibly making games, but they would probably focus on more accessible and profitable platforms. Alll the old games are being covered by PS4, Xbox, Nintendo Eshop, and then you have the X, mini, and arcade stick, so it's over kill to release them all on another platform. SNK reviving older franchises for like a metal slug exclusive, would also be more profitable on the modern systems, than buying a system for a few exclusive games .

Keeping my expectations as low as possible.
What was Neo Geeo 2 in any case?

DevilRedeemed said:
Keeping my expectations as low as possible.
What was Neo Geeo 2 in any case?
Click to expand...

Since it’s unrelated to the neogeo mini and the arcade stick pro, this would be the mini neogeo console shell I’d want lol: 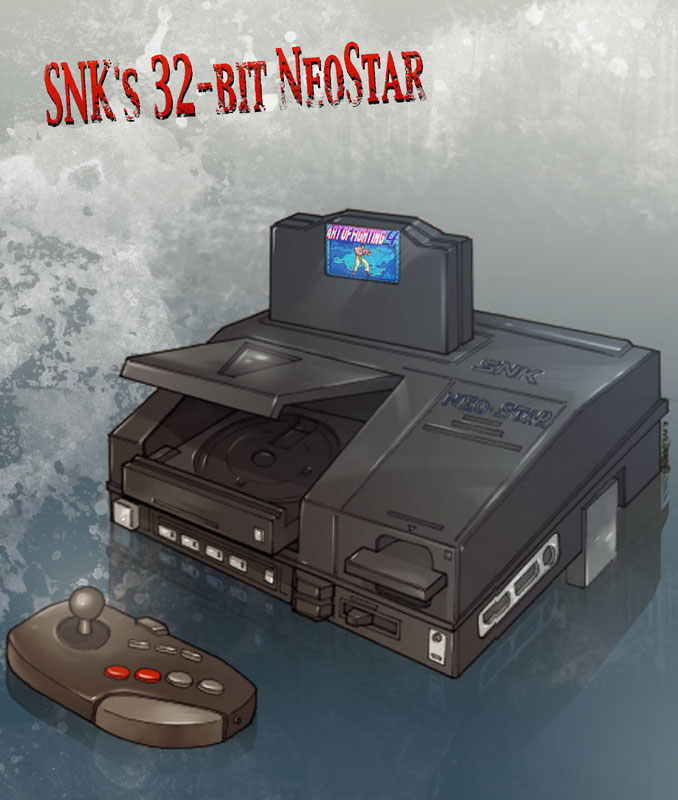 BlackaneseNiNjA said:
Since it’s unrelated to the neogeo mini and the arcade stick pro, this would be the mini neogeo console shell I’d want lol:

Same. I know SNK doesn't have coin-op money anymore to back it but they're no strangers to niche, expensive home consoles. Why not re-release the Neo for real this time (none of that X crap)? They could probably even get away with emulating carts/discs so they can put modern horsepower for modern "native" games and open up the door for indies. It wouldn't be a competitor of PS4/XBOX/Switch but it would still sell considerably well. A hybrid Neo console would be able to make the Ouya model work purely through brand recognition (unless of course they fuck up on the emulation stuff AGAIN).

Sounds like a Neo Geo Mini with their back catalog downloadable for $$. Make it tiny since a) the mini form factor was not awesome and b) selling someone a giant arcade stick is a space issue for casual retro fans.

But maybe it’ll be a Hyper Neo Geo Mini that can also make me a Bloody Mary in the morning.

Here's a semi-sober but unlikely take on things.
They saw Exa-Arcadia and how there is viability in putting out games for the arcades even though quite unlike it was in days of yore.
Not because Exa-Arcadia have been succesful in any other area than getting other games makers on board.
So SNK riding the wave of newfound fame, their mini consoles and arcade sticks a way of promoting themselves - they are in a position to release a console-arcade hybrid, with the backing of other arcade game makers and maybe the likes of the German guys that made all the unnoficial rip off games.

Wishful thinking but got to keep that deluded flame alive

Lolol tell us how you really feel

awbacon said:
Lolol tell us how you really feel
Click to expand...

I just get tired of all these "YouTube" people acting like they are some gaming god of news and just regurgitate what others rumor about. He's one of the worst and he can eat a bag of baby dicks.

Kid Panda said:
...I called him out when he said the Neo Geo mini was fake because I had it in good knowledge that it was real...
Click to expand...

Oh yeah, you’re right. This was indeed the same guy who said the neogeo mini was a hoax even though there were already photos of the thing floating around online (the gold plated one that snk had given only as a gift at that point).
Last edited: Apr 15, 2020

Wait, people actually watched the OP video? I thought it was more of an excuse to start conversation on the topic...

Kid Panda said:
I just get tired of all these "YouTube" people acting like they are some gaming god of news and just regurgitate what others rumor about. He's one of the worst and he can eat a bag of baby dicks.
Click to expand...

Haha no I don’t blame you one bit in your impression. It’s all clickbait “scoop” stuff

I'll be cautiously optimistic about the Neo-Geo 3 Mad Little Pixel discussed. SNK has always been a weird company; 50% genius and 50% well.. utterly bizarre. Over the years SNK has put out amazing products, and some that should have never came out. Nintendo understood people's strong nostalgia towards their 8-bit & 16-bit systems and wouldn't soil their rep by half-assing their classic systems. They set the bench mark for quality. Nintendo got it.

I'm not sure why SNK can't look at the Neo-Geo X, refine it, make it up to the quality standards of the SNES classic and release that. This whole thing about the Neo-Geo 3 being a Metal Slug toy, that's a game too.. ehhhh. We haven't seen the NG3 yet, but again the easy/obvious thing to do from the get go; either a quality Neo-Geo AES Mini or Red Neo-Geo MVS Mini is the thing SNK seems to be the most obtuse to. I mean the Turbo Grafx 16 Mini is niche and Konami put out what most people seem to dig.
Last edited: Apr 15, 2020

Seriously though, fuse saner and kidchameleon1.

I'm disappointed in myself for having his videos in my feed and getting SNK news from him sometimes. He's not who I want to be getting new information from.

If its a new system for releasing new games from their known IPs ime interested.

If its for original games or some kind of BS streaming service I dont give a shit.

Kid Panda said:
I just get tired of all these "YouTube" people acting like they are some gaming god of news and just regurgitate what others rumor about. He's one of the worst and he can eat a bag of baby dicks.
Click to expand...

Besides, over the last four years SNK has made how many new games? Oh yeah, two. Like it or not, SNK is a niche developer in this modern age that caters to a specific audience, the FGC. And that audience is a very, very, small part of the broader gaming community - and even then, the largest sector of the FGC is the Smash population who cares nothing about Terry Bogard or SNK.

Despite what "catch-em-all" retro-gamers on Youtube say or think, SNK just doesn't have the audience or capital to take that kind of risk. Another console derivative way to release old content? Sure. A new system with brand new games - especially quality sprite based games? No chance. Classic SNK died 20 years ago. There's plenty of nostalgia to continue to milk 90's IP's for another decade or so with re-releases, but that's about it.

Some of the indie developers create really good quality stuff, if they had the brains to bring some of them in then I see no reasons why there couldn't be new 2d content. It wont happen of course.

Is this a new thread? I'm pretty sure we did this thread last year.

Neo Alec said:
Is this a new thread? I'm pretty sure we did this thread last year.
Click to expand...

I think it's just left over from last year (two years ago, now?) when SNK mentioned they have "two Neo-Geo Consoles in the works." Good chance there was already a thread about it. I think people are just bored with the pandemic and need something to talk/complain about.